Langtang valley trek is one of the short trekking routes compared to Everest base camp or Annapurna circuit trek.  It is also the closest trekking route here.  We can reach the starting point of the trekking after just about 8 hours of bumpy ride to Syafrubesi.  This valley was completely destroyed during the massive 2015 earthquake.  Since then, this trekking region was closed, but recently with the reconstruction of the trekking route as well as houses and lodges in this region, this trail has been opened.This moderate level trek will take you to the beautiful Langtang valley.  We will pass through two national parks i.e. Shivapuri National park and Langtang National Park while doing this trek.  While trekking through these national parks, you will be able to see lush green vegetation.  Wildlife has been well preserved in this national park.The trail will take you through dense forest of rhododendron, fir, oaks and pine.  If lucky enough, you will also get a chance to see different wildlife like red panda, monkeys, lizards, and yaks.  The best season to trek in this region are September to December and February to April.  During this season, the weather will be clear and will get a chance to see mountains.  This teahouse trek will give you a chance to be close to the nature and also you will able to get a chance to see the local lifestyle and culture.

Langtang Valley Trek starts from Syafrubesi.  Trekking trail follows through the bank of Langtang river.  We have to cross this river via suspension bridge.  Trail passes through the Tamang heritage trail.  This trail will help you know more about the local Tamang people.  It will also be helpful to know about the culture and daily lifestyle of the local people living in this region.  The trail passes through different villages like Bamboo, Lama Hotel, Ghoda tabela, Langtang Valley, and Kyanging valley.  The trail is not so difficult, so almost everyone with a good physical condition can easily do this trek.  The trail is mostly teahouse and lodge trail, so you will be staying there as a local with a minimum facility to eat and rest.  Langtang valley and Kyanging valley is a small village with few house and teahouse.  Beautiful mountains surround this valley.  Dorje Lakpa, Langtang Lirung, and Sisha Pangba are some of the mountains that you will see during this trek.  Little hike up to the Kyanging Ri will get a good view of the surrounding mountains as well as Kyanging valley below.  Also, you will see few glaciers from the top of Kyanging Ri.  This valley is mostly influenced with Tibetan culture.  Hence, you will see century old monasteries, wall paintings, Mani wall, prayer wheels, flags and stupas during the trek.

Tea House while in Trekking 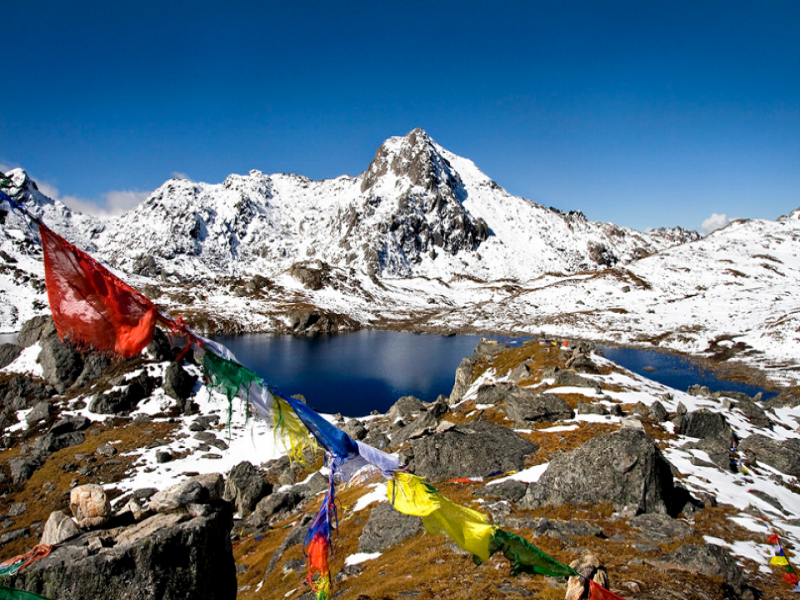